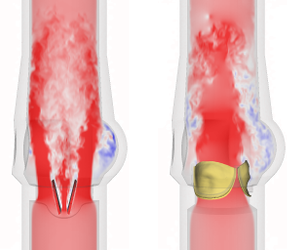 Ben Vadala-Roth’s paper, Stabilization Approaches for the Hyperelastic Immersed Boundary Method for Problems of Large-Deformation Incompressible Elasticity, has been accepted to appear in Computer Methods in Applied Mechanics and Engineering. (A preprint is available on the arXiv.) This paper proposes a simple stabilization that resembles approaches from nearly incompressible solid mechanics to improve the volume conservation of the immersed finite element method, as demonstrated by its performance in widely used benchmark problems of incompressible hyperelasticity adapted from the solid mechanics literature, along with fully dynamic FSI applications, including a large-scale model of esophageal transport.